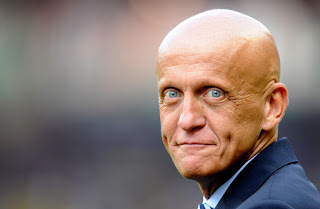 Pierluigi Collina was born on February 13, 1960 in Bologna (Italy) and was in his youth an avid soccer player. When he was 17 years old, talked him into a good friend to come along to a training course for football referees. There was noticed very quickly the talents of Pierluigi Collina and he knew soon that he wanted to become referees. This refereeing courses he operated at the beginning but only in passing. His main focus was studying economics at the University of Bologna, which he completed successfully. Nevertheless Pierluigi Collina began meantime, to whistle for the first time football matches under his leadership.

Pierluigi Collina: "I whistled in places that were difficult to find on the map"

Pierluigi Collina proved to be a referee from the first moment very adept at. Though he had mostly to do it as a young director with older football players, he knew how to make the right decisions even under great pressure. At the age of 24 years he had to overcome a severe blow, since he was diagnosed with a severe form of hair loss (alopecia universalis). Within just a few weeks, he lost not only his entire hair on the head, but also his hair all over his body. It was a difficult time for Pierluigi Collina, privately he could retire, but as a referee, he was always at the center, what a tremendous psychological burden represented.

Despite many derogatory remarks about his appearance and his sudden balding Pierluigi Collina tried to go on his way as a referee. He worked his way up step by step in higher leagues before and initiated at the age of 31 years already football matches in the top Italian league. Pierluigi Collina trained up to five days a week to keep fit, and prepared specifically for each game. He knew all about the teams, the players and the tactics. This allowed him to properly respond to various events in the games.

Pierluigi Collina: "One has to be totally able to read the game"

Pierluigi Collina had a great charisma and was a very determined referee. With its striking appearance and his unusual facial expressions, he quickly became a celebrity among football referees. In addition, he often met idiosyncratic decisions. In one game he let the teams do not change sides, because he wanted to prevent a goalie with missiles of fans was attacked. In another game, he showed a substitute on the bench after referee insult the red card, although there were no official rule. The rules were amended shortly thereafter because of this unique action and completes. Pierluigi Collina analyzed his games always very accurate in order to not repeat once made misjudgment.

Pierluigi Collina: "All make mistakes in football, but none is it so pilloried as referee"

Pierluigi Collina rose to by his talent to one of the world's best referee. He led the 1999 Champions League final and also the most important football matches at European Championships, Olympic Games and World Championships. From 1998 to 2003 he was elected six times in a row for "World Referee of the Year". Moreover Pierluigi Collina became a model for many people, which is also suffering from hair loss and alopecia. He showed that you could achieve anything in life, if you only had enough will and perseverance. Decisive was the inner strength, not the appearance.

Pierluigi Collina: "In questions of life Respect is the key word for the people dealing with each other"