Evo Morales: "I come from the people, I dress like the people" 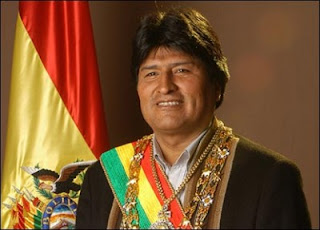 Evo Morales was born on 26 October 1959 in a small village on the plateau Altiplano (Bolivia). At an altitude of over 3,500 meters and secluded from civilization, he grew up in abject poverty. Four of his siblings died very early, for the rest of the family was barely enough food available. Often there was to eat a small bowl of corn soup only three times a day. In simple mud huts there was no electricity and no sanitation. Most people lived here from agriculture, and so had to Evo Morales already working at a young age as a herdsman, in order to support his family. During the school year, he was also assistant in a bakery and played trumpet in the street in order to earn a living can.

However, since the conditions of life in this desolate region have been getting worse and it came constantly to crop failures, Evo Morales moved with his family in the province of Chapare, a tropical lowland Bolivia. Here was the center of the Bolivian coca cultivation, because Coca was here for the farmers the main livelihood. Evo Morales was now the cocalero and planters, which grew the coca shrub, like many other farmers. Chewing coca leaves was in Bolivia for centuries an integral part of culture, moreover, the leaves were used as a beverage, as a dietary supplement and for medical purposes. Evo Morales was also involved in the communities, he collected money to build roads and build schools or health departments. But soon there should be major problems, because the coca plant had a decisive disadvantage. From the harvested coca leaves could also win the inebriating drug cocaine.

The USA wanted to prevent the production of cocaine by any means and decided to stop the drug trade directly on the source of origin, and these were the coca growers. The Bolivian government had to US pressure not counter and walked supported by the Americans against the Coca plantings before. With brutal military intervention, it soon came to savage clashes with coca growers. Because by destroying the plantations the people's livelihood has been destroyed and many poor farmers were facing ruin. But a man wanted thus not resign and started against this merciless exploitation to defend themselves. Evo Morales quickly became the undisputed leader of all the protest movements of the coca growers and began as a union leader, to lead the resistance of the cocaleros.

Evo Morales: "For us, it's about survival"

Evo Morales defended himself by all means which were available to him. There mass marches and demonstrations were organized, erected roadblocks and held hunger strikes. With tireless effort to Evo Morales began to farmers, although almost had no chance against the well-equipped military. Evo Morales was not only arrested several times, but was beaten by drug police and tortured, there were a lot of dead farmers complain. Through these violent conflicts, there were massive social unrest in Bolivia, because the coca growers also found mostly broad support in society. Evo Morales tried not only as a union leader, but now also as parliamentarians in the opposition for the rights of coca growers to fight and gained more and more power and influence. As the pressure on the current government eventually became too great, new elections had to be recognized. Evo Morales put it all on a map and decided to stand, despite the great upheavals of the presidential election. On 22 January 2006 he would eventually create the unthinkable, because on that day he was elected with the help of his protest movement for the first indigenous president of Bolivia.

Evo Morales immediately ordered extensive measures to, because for him were always his compatriots in the foreground. There were important changes in the health and education policies and a comprehensive agrarian reform was initiated. Thus he saved thousands of coca growers their existence and turned away a great famine. Therefore, people loved their new president, because he never allowed himself to be beaten by powerful countries and courageously fought for his country. He was always dressed very easy and never wore suits or ties, he also caused an international sensation. But by this confident and carefree appearances changed the image of Bolivia Evo Morales for the better, and this. Around the world

Evo Morales: "I come from the people, I dress like the people"

Evo Morales had to fight as a child by severe poverty and sat down later single-handedly against powerful competitors to fight back, which threatened the livelihoods of poor farmers. Through this incredible courage he managed on their own to rise from a poor coca growers as president of Bolivia. He showed that you could do anything in life with the right attitude and a large dose of willpower. In 2009 he was appointed for this reason by the General Assembly of the United Nations "World Hero of Mother Earth".