Nick Vujicic: "I hope my story inspires others to not to give up" 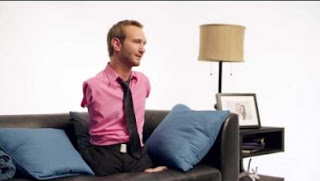 Nick Vujicic was born on 04 December 1982 as a son of Croatian emigrants in Australia. The pregnancy was more straightforward, but the shocked parents had to say after the birth that their child completely lacked the arms and legs, only the thigh neck on the left side, he had a small feet with two toes. The parents of Nick were desperate and in a moment she wondered how well the future would look for her disabled son. But when the research showed that Nick was a perfectly healthy baby, she decided from now on to do everything for her son to be able to offer him a normal life can.

Nick Vujicic had due to the Australian legislation, a school for the disabled to visit, as this law was changed but he was one of the first disabled children who were allowed to attend a regular school. Nick tried to be like his peers, but his physical handicap was just too much. He was ridiculed and scorned, without his arms and legs, he became increasingly marginalized and the outcast. His parents tried to encourage him to ignore the negative comments against him, however, the situation was getting worse. Nick was very lonely and became depressed, he felt like a heavy burden for the school and for his family. And so he made the terrible decision to take his own life at the age of ten years. He saw no way of ever being able to live a life that made any sense.

Nick Vujicic: "I cried myself to sleep and dreamed that my arms and legs in the morning suddenly there were"

Nick Vujicic was drown in the bathtub and turned already his funeral before. And when he had his parents imagined that would feel guilty for his death, he covered his situation. Despite his hopeless situation with the many setbacks it was the encouragement of his family and the love of his parents, who brought Nick to not to commit suicide. He decided to continue fighting, even though he could not imagine how his future would look like.

Nick Vujicic: "The love of my parents, which prevented me from killing myself"

At the age of 13 years was a blind speaker at his school. Nick noticed how each student was immediately impressed by the story of a man who made the most of his life in spite of his blindness. This was the turning point in the life of Nick Vujicic and he began to look at his life with different eyes. Nick accepted an invitation, where he was to speak to a small group. After his speech about hope and how he mastered his life, all the people were so excited about the little boy that Nick now started to address growing groups. He now always got more confidence, but also in normal life he looked now positive about the future.

Nick Vujicic: "I was only focused on what I wanted to be able to do and to have what I did not. Here you then forget at what you have and what you can be thankful "

With his little feet he could move around and he also learned to write it or to use a computer. In addition, Nick was an avid sportsman, from his handicap he could not limit it. He learned to swim, where he served his little feet as a kind of propeller, or surfing on the water. He played football and loved with his skateboard to ride, and even he could play golf. He simply took the bat between his chin and his shoulder and was able to swing the bat. While it was difficult for Nick to learn this, but now he could play better than many golfers with two healthy hands and two healthy legs.

Nick Vujicic: "You do not know what you can achieve anything if you do not 'try'

Nick Vujicic attended high school and acquired after university degrees in accounting and financial planning. But the profession he made his great passion, because he liked other people to tell his moving story about hope and courage, and so he became a motivational speaker. Meanwhile, he has already visited the whole world to tell of his life and to encourage people to fulfill their dreams. No matter where he went, whether in businesses, schools, churches and even in prisons hardened criminals, all the people were moved by the fate of Nick Vujicic and how he mastered his life without arms and legs successful.

Nick Vujicic managed to give his life meaning and now helps other people themselves, again to find courage and hope in life. While others would have long given up in his situation, Nick Vujicic leads a life without limits with incredible strength and energy, and this without arms and legs.

Nick Vujicic: "I hope my story inspires others to not to give up"