Nina Wortmann: "Before my accident, I ran away from any camera " 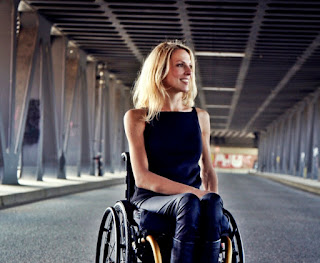 Nina Wortmann was born on 08.09.1980 in the town of Coesfeld (Germany) and successfully completed the education. After they had to stop training as a forestry economist for health reasons, she began after a short maternity leave, a second training as an occupational therapist. On 12.04.2003, the life of Nina Wortmann should however change forever when she had a fatal car accident with her little child. Miraculously, her daughter nothing had happened, but she did not get off so lightly of it.

Nina Wortmann: "Suddenly everything was different"

Nina Wortmann suffered a form of paraplegia, where both legs and arms were affected. There followed several months laborious treatments and workouts, which should pay off soon. Could Nina Wortmann move his head at the beginning, she managed over time to be able to move more and more parts of the body. Supported by her family and friends she fought back successfully in their new life. But her legs were irreversibly damaged, they had to rely henceforth on a wheelchair.

Nina Wortmann tried to look positively to the future and focused on things that you could do in spite wheelchair. One day she was reading from a model contest where only women were able to participate in a wheelchair. Nina Wortmann was impressed that there were actually women who wanted to be photographed in spite of the wheelchair. Her husband urged her now, also take part in this competition, but Nina Wortmann in this regard was rather shy and she lacked the courage to apply. Finally, she gave her husband but by and gave a letter of motivation from, since they anyway not so expected to be accepted by the organizers.

Nina Wortmann: "I and Model - that just does not fit. Before my accident, I ran away from any camera "

A few weeks later, she suddenly received a phone call that they had been chosen from among many applicants to participate in the model contest. Nina Wortmann could not believe it, but they wanted to take up the challenge. It quickly became apparent that they had actually fun at this competition, to face the flashbulbs of the photographers. Through her charm and natural charisma managed Nina Wortmann actually, to finish in the top ten finalists and was proud to have made it this far.

Nina Wortmann: "Many people who have experienced a bad situation, believe that it goes no further. But you always have the opportunity to choose a path that takes you back to the front "

While this model contest a renowned photographer became aware of Nina Wortmann, who was delighted with her performance. In a professional photo shoot he was impressed with their special charisma and shot impressive pictures of her. Nina Wortmann now got more and more confidence, because they could get hold fast more modeling jobs. It has now been repeatedly booked by major newspapers and magazines for their natural beauty and on television she had appearances.

Although Nina Wortmann had never undergone special training as a model, she managed with consistent work and by their natural look to chart a successful path into this industry. Through her work as a model in a wheelchair you want to make other people with disabilities courage always to believe in their dreams and never give up, no matter what blows life has in store.

Nina Wortmann: "My greatest wish is that all people who do not fit the norm, will eventually be recognized more by the Company. Whether on the catwalk, in fashion magazines or in advertising "