Philippe Croizon: "I want to die" 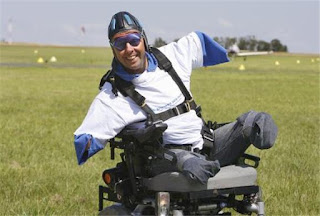 The 26-year-old Philippe Croizon planned with his pregnant wife and young son a big move, since the current apartment had simply become too small for the young family. To this end, he wanted to take off the TV antenna on the roof, when suddenly a terrible accident happened. Philippe Croizon got in this work in a high-voltage line and received a fatal electric shock. 20,000 volts shot through his body and wounded seriously the young family man. Usually you had no chance, so to survive a massive electric shock, but the doctors were fighting for the life of Philippe Croizon.

Miraculously survived Philippe Croizon these electrical accident, however, he suffered severe burns and doctors were forced to amputate his limbs gradually. His two arms and his right leg had already been surgically removed, now also had to be taken off his left leg. Philippe Croizon was now forced abruptly to make a living without arms or legs, and this made it difficult to create. He could not imagine a more meaningful life and let them go to, hoping that death would take him soon.

Philippe Croizon: "I want to die"

One day he saw a documentary on television where a woman despite the greatest difficulty the English Channel by swimming (between Great Britain and France). Philippe Croizon began to draw new hope, because now he had an insane goal in mind. He also wanted to dare this kilometer-long crossing regardless of disability. The spirits returned slowly and the family was happy that Philippe Croizon again found a purpose in life and not giving up. He began an intense workout to transform his fat into muscle, since before his accident he could not even swim two lengths in a swimming pool. Special prostheses with flippers were made to allow Philippe Croizon swimming. But the first swimming attempts ended in disaster, with no stamina and with the strange prostheses the project seemed to be hopeless.

Philippe Croizon: "It was a torment The beginning was a disaster."

Philippe Croizon wanted through these setbacks but do not let it get. He trained up to five hours a day to improve his fitness and perfecting his swimming style with the prosthesis. After two years of tireless effort, he had finally managed to Philippe Croizon was ready for his big adventure, to swim across the English Channel unpredictable. Many well-trained swimmers failed already in this project, Philippe Croizon wanted to accomplish it without arms and legs.

Philippe Croizon fought against strong currents, against the weather and against gusty winds. Due to the low water temperature also could threaten hypothermia constantly, he was accompanied only by a small boat caregivers. On September 18, 2010, after more than 13 hours of hard struggle he had achieved its major goal. Philippe Croizon swam the first man without limbs the infamous Channel.

Philippe Croizon: "This is a dream for me. Although I had the whole body pain, but I did not doubt it now that I can do it "

Philippe Croizon swam after and broke numerous records throughout the world. He pointed with his admirable attitude, what a man without arms and legs was capable of and what services you could actually accomplish. Although he had never been a gifted swimmer, he won despite disability with great fighting spirit gradually evolved as one of the most extraordinary athletes in the world.

Philippe Croizon: "Everything is possible if you have the will to go beyond yourself"