Especially Luz Long had the courage to ignore all ideological boundaries, although he later received a stern warning for it. Before the eyes of Adolf Hitler of black Americans and white German blanketed the racial theories of the Germans in the ridicule 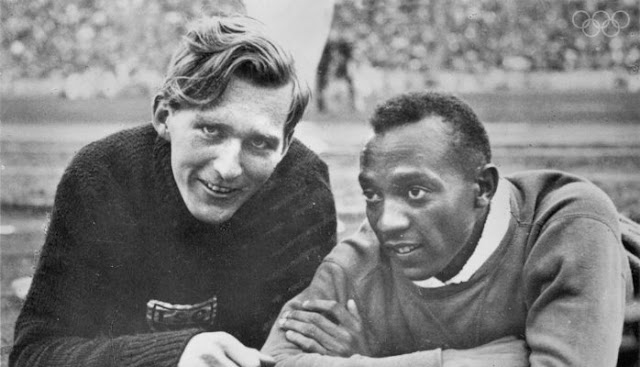 The Summer Olympic Games in 1936 in Berlin in Germany was a gigantic propaganda spectacle of Nazism under Adolf Hitler. The aim was to let stand the regime in the world public positively and to glorify the German people. In the midst of this volatile situation there was the black American athlete Jesse Owens. Over 100,000 spectators attended the Olympic Stadium in Berlin place to watch the various competitions can. Jesse Owens was considered a favorite in the long jump, his biggest competitor was the German athlete Luz Long, who was considered a crowd favorite and star pupil of the Germans. It developed an incredible duel between these two athletes. Frenetic jubilation surged as Luz Long 7.87 meters and thus new Olympic record jumped. Adolf Hitler also was in the stadium and clapped satisfied in their hands.

Then came Jesse Owens. The Americans stormed incredible speeds to bounce brand and catapulted into the air. The spectators were amazed, 8.06 meters and thereby winning in this competition. The Nazi government was of course anything but enthusiastic about the black man who has just beaten a white German. However, as the losing itself, Luz Long responded to his defeat, was impressive.

It would have been enough just to congratulate his fiercest adversaries. But Luz Long was a true sportsman and did much more. He hugged the winner Jesse Owens and showed the world his appreciation for the American victor. Later, the two long jumpers arm turned in a lap of honor arm on the cinder track. There is even a photo where Luz Long and Jesse Owens absently lying in grass and happily chatting to each other. For the ruling Nazis created the friendship between the two athletes was of course a big flaw.

Jesse Owens was then still the big star of the Olympic Games and won a total of 4 gold medals. But the friendship with Luz Long was a gesture for eternity. Especially Luz Long had the courage to ignore all ideological boundaries, although he later received a stern warning for it. Before the eyes of Adolf Hitler of black Americans and white German blanketed the racial theories of the Germans in the ridicule. They made the world for a brief moment to a better place because they stopped her heart.

Jesse Owens: "It took a lot of courage to make friends in the eyes of Hitler's with me. One could all medals and trophies, you I have melted down, and they would not for a film on the 24-carat friendship I felt at that moment for Luz Long".