I live by the practical wisdom that you reap what you sow and I think that I am the best proof. We must learn to live together " 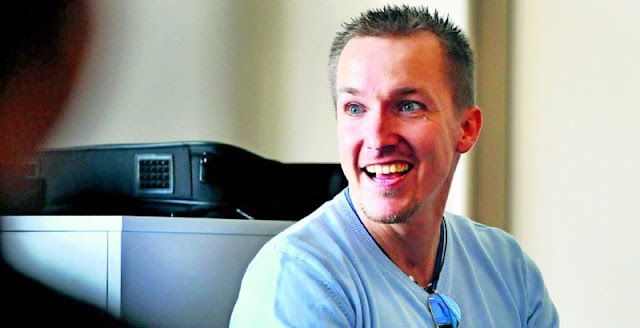 Christoph Rickels is a fun-loving young man who likes to go to parties and draws with friends around the houses. It costs from not only the life to the fullest, but also stands shortly before training as an army policeman. One day he is as so often in a disco on the road, where he donated a girl a drink. This would change his life forever.

When Christopher Rickels evening leaves the disco later, already a jealous girl friend waiting for him. A fist hits him from behind at the temple and Christoph Rickels beats his head on the hard pavement on. Unconscious, he is brought to the hospital where a brain hemorrhage is detected. Christoph Rickels falls seriously injured in a coma.

Christoph Rickels: "When I woke up four months later, I was almost completely paralyzed"

When Christopher Rickels awakens after four months, he has been severely handicapped to 80 percent. Overnight it has to relearn everything, how to speak, walk or eat again. Three years spent Christoph Rickels in various rehabilitation clinics to fight their way back to normal life again. He has a real fighting spirit and did not give up. With his iron will he soon finds a new life's work by founding the project "First Togetherness".

Christoph Rickels: "I am the terrifying example of the dire consequences of violence"

This project Christoph Rickels will advertise a coexistence and tolerance. He visits schools to tell the children his destiny and to promote non-violence. Christoph Rickels penetrates with his story immediately to the students through, since it can affect anyone. Because the violence is so high that even occurred on defenseless young people on the ground. And since you want to be cool, someone is filming with yet. But the consequences can be disastrous, and for fun deadly serious. As with Christoph Rickels happen.

Although Christoph Rickels must deal with his own heavy blow, he cares selflessly to others. His ultimate goal is again to live together and to make egoism aside. Especially in this day and age he struggles in the schools alone on a limb. But now more and more students to hear him and manages to reduce the violence of children significantly.

Christoph Rickels: "The First Togetherness project should represent a global change. I live by the practical wisdom that you reap what you sow and I think that I am the best proof. We must learn to live together "