Martin Cooper: "Everybody would talk on a wireless phone " 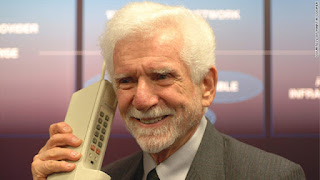 Martin Cooper was born on December 26, 1928 in the city of Chicago (USA) and showed at an early age a strong interest in mechanical and technical things. He constantly dissected things in order to understand how they worked, and built it again together. So he did research and worked meticulously often throughout the day and it was hardly surprising that he in Chicago studied in later years at the Technical University Electrical Engineering and also successfully managed its financial statements.

Martin Cooper: "I tried as a child to really understand how things worked"

After Martin Cooper got a job at the company Motorola in the research and development department. Here he could give free rein to his creativity and was mainly specializing in radio equipment. The Chicago Police Department was equipped at that time with a radio in the car in order to get in touch with the headquarters can. Were the police but further away from their vehicle, they could not make quick message, as this only in the police car was directly possible. Martin Cooper developed for this reason with a team a construction where the police always carried its own receiver with you to be connected to the radio system in the car. So outside of the vehicle was the first time to contact the center possible.

Since this system was convenient and met with great popularity, Martin Cooper wanted to prove that the production of a completely portable radio was possible. In this time communication mainly been possible only with letters over long distances or you had to rely on the wired telephone. Martin Cooper had a great vision of a phone, which had been constantly with them and where they were at all times. He began to experiment and used all his experience, which he had laboriously built in recent years. But soon there were increasing negative votes, which did not believe in his project and his idea.

The research department around Martin Cooper needed a lot of money, to promote the development of this new phone. Constantly got Martin Cooper pressure from his superiors, because they wanted to see results, especially high turnover. Martin Cooper knew his project swallowed a lot of money, but he also knew that his idea had to prevail eventually. With a lot of hard work, finally the first prototype of the mobile phone has been made, which weighed more than one kilogram and had a length of more than 20 cm. It was the April 03, 1973, when Martin Cooper introduced the first telephone in the world via a mobile phone, but who should be his first interlocutor?

Martin Cooper called just with his biggest rival, the technical director of "Bell Labs", a similarly large research facility in the telecommunications industry. This could not believe it that Martin Cooper looking at the city of New York was on the way and already could phone wirelessly. Martin Cooper was proud of his newly designed mobile phone, he had proved with his first conversation not only the functionality of the phone, but had at the same time exposed his most bitter rivals.

Martin Cooper filed on October 17, 1973 successfully a patent for his invention. But it took several more years before the world's first commercial mobile phone Motorola should come on the market. The Dynatac 8000X had a short call duration and cost nearly 4,000, - US dollars. Despite the high price, the phone but sold sensational and after only one year more than 300,000 people had already purchased the mobile phone. By technical developments and new innovations the mobile phone quickly spread, it became a best seller around the world.

Martin Cooper led the people through the new phone into a new era of communication. There was hardly an invention in human history, which so profoundly in people's daily lives intervened as the mobile phone.

Martin Cooper: "We knew that one day would have any a phone, but it was hard to imagine that it would happen in my lifetime"