Aron Ralston; The most difficult decision of my life 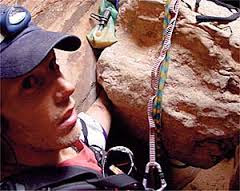 On 26 April 2003, the climber Aron Ralston made on a climbing tour to celebrate the Blue John Canyon (USA, between Colorado and Utah). The 27-year-old was an avid climber and spent every free minute in nature. In known circles he was considered a very strong and well trained, which is why he was traveling alone also often. He had at that time tell anyone his goal, and no one knew where Aron Ralston was traveling. A fatal error, as it turned out later still.

Aron Ralston was on the third day of his climb and had to climb a nearly vertical sloping, very narrow gorge. He had to overcome large boulders that should not pose a risk in his opinion. But suddenly moved one of these colossi, first met his left hand and then squeezed him his right hand against the rock wall a. Aron Ralston screamed in shock and even before the stabbing pains. A 400 kilogram boulder held the seriously injured young man in this narrow canyon caught with little food and little water. And soon it became aware that no one knew his whereabouts and no one would look for him.

Aron Ralston tried to work with a multi-tool and a penknife the rock, in the hope that he might somehow get free his right arm with his left hand. But no chance. Then he tried to raise with his equipment the rock, but again only in vain. Time passed, and the victim was becoming weaker. The hope that someone would find him, had now also done. On the fifth day he had no food and no more water, he drank his own urine in the meantime. In the darkest hour the soul and in the greatest despair, he finally made a bold decision: If he ever wanted to survive this disaster, then he had to cut off his arm.

He knew that could cost him his life this action, and so he took a last message with his little video camera on: "Mum, Dad, I'm sorry. I love you. "He even said goodbye to his sister and shared his belongings to his friends. In the rock he scratched "Rest in Peace", with his data. When he had done this, he finally was preparing his operating table.

He put his arm on a Radlerhose to have a cushion. He had already prepared the set pressure bandage. With the already dull knife he somehow managed to cut the skin and tissue. But then his incredible undertaking was already condemned to failure almost - how could he cut the bone? The blurred knife he had a chance at all. Aron Ralston was a daredevil, and with his next action he made this clear. With an enormous will to survive, he turned his arm his injured hand as long in one direction until the bone broke, the first spoke, the Elle. Using the pressure bandage he did then the rest. At some point, the forearm was from then, and Aron Ralston was free again for the first time in a long time.

He almost fainted when joining his arm, but he was lucky. Handed he rappelled from 20 meters and finally went out of the valley on the road, completely powerless, and severe pain. Aron Ralston managed with great effort to march still about 10 kilometers until he ran into the arms of hikers who alerted a rescue helicopter immediately. The schwerzverletzte and starved young man was the death still closer than the life, the loss of blood and exhaustion were enormous. At the hospital the doctors saved his life, she shortened a little bones and muscles were sutured to the skin.

As Aron Ralston was discharged from the hospital, he suffered from severe depression. But psychologists helped him to process the horror experienced and overcome. In the book "In the Canyon: Five days and nights until the most difficult decision of my life", he wrote down his incredible accident. In addition, their struggle for survival under the title "127 Hours" filmed.

Today Aron Ralston climbs again on the mountains, a specially made prosthetic arm with an ice pick makes it possible for him. His pinched hand was cremated (cremated) and the ashes scattered over the canyon. Without his courage and incredible will to survive Aron Ralston was no longer alive. The magazine "Gentlemen's Quarterly" elected him in 2003 even Man of the Year.