Markus Frind: "I wrote every line of programming itself" 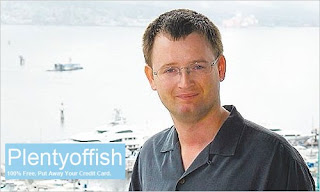 Markus Frind was born in Germany, emigrated as a child with his parents but to the United States, where he was studying computer science later. He got a job in a medium sized company, where he worked as a programmer. After the bursting of the Internet bubble in 2000, however, many technology companies ran into trouble. The rapid spread of the Internet in wide circles of the population has led to many companies start-ups, but the high earnings expectations could not fulfill. The market collapsed and many companies were then insolvent. The company Markus Frind got the economic turmoil felt and began to terminate employees.

Markus Frind also had to give up his job and became unemployed. He let his head but not hanging, trying to improve his programming skills on. And so he was experimenting with the creation of a personal online dating service for the Internet, where people could seek partners. Already several times Markus Frind had annoyed that all dating portals demanded money for a membership, and this he wanted to change. In 2003, he registered his first dating website under "Plentyoffish.com". At that time there were already many large online dating services on the Internet, the website of Markus Frind was therefore only smiled and was seen no real competition from this small one-man businesses.

Markus Frind was convinced of his dating portal and developed his side conscientiously continue. Constantly tested and optimized its programming it until it was perfect for him. He absolutely had to have success, because due to unemployment was also its very existence threatened. However, Markus Frind took the risk, really do not charge for its online portal, just as he had always intended. He wanted to take only through advertising money, but this was only possible if enough people would visit his website.

His website "Plentyoffish.com" was very simple one, he renounced special and complicated programming and also to Newsletter (electronic newsletter). The design did not look very professional, but it served its purpose. For Markus Frind, the dating site was perfect, they had to work only technically correct, and she did. In the first few months he earned a few dollars with his website, but he was still convinced to be so successful.

Markus Frind: "I wrote every line of programming itself"

Markus Frind continued to teach all his energy on his project and constantly improved its website further developed. And over time became his dating portal more known and more and more people signed up. Like wildfire soon spread the message on the Internet that it is now in fact a single market gave, which was offered completely free. As the market for online dating in these years lay a rapid growth, even "Plentyoffish" grew steadily further and grew.

Markus Frind with his online dating portal "Plentyoffish.com" evolved into an incredible success story. Within a short time overtook this simple dating portal all major competitors and was the largest single market in the English-speaking world with over 10 million members and nearly 150 million visitors per month.

Markus Frind continued his clever concept always consistently, because the platform is automatic and virtually unaided. Since the website is financed solely through advertising, no paying customers must be supervised and managed, where paid dating sites require many employees. From time to time he has to answer emails from people who can not cope with the functions of his side, he does this in a few hours a week, and more Markus Frind also not working on his dating website. Due to the high footfall and revenues from advertisements are correspondingly high.

Markus Frind: "There are only about 1000 websites in the world with as much traffic as mine, and mine is the only one that is run by a person"

Markus Frind rose very quickly from unemployed programmers on the internet millionaire. He had no assistants, no employees and no capital. He discovered a small gap in the market and with a lot of diligence and work was his business idea more profitable. Had he his Love cards just like any other run, he would have quickly disappeared from the scene. His idea of ​​offering his service completely free of charge, should prove to be a goldmine. Markus Frind had a vision and did everything possible to put it into reality, and this was his simple secret to success.

Markus Frind: "Too many people assume that an original idea is something that other people perceive as different. I have created the first truly free dating site and the first to work. Just as the first Google search engine developed that worked "