Kimani Maruge: "For me, education is the key to freedom" 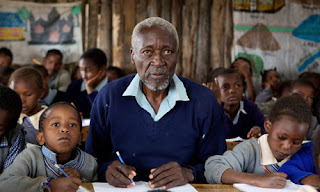 In 2003, the government abolished in Kenya (Africa) from the fees for primary schools in order to enable every citizen the right to education. This was met with enormous consequence, because many poor families to school until then could not afford. Under the large influx Also Kimani Maruge, which already very looked forward to starting school was. But he differed fundamentally from its mainly younger classmates because he was already 84 years old.

Kimani Maruge grew up in the 1920s in Kenya in a poor family on. As a child he had never had the opportunity to attend school. In Mau Mau Uprising in the 1950s, he fought for the independence movement against the colonial power Britain, where he was subjected to the worst torture. When in 1963 Kenya finally gained independence, believed Kimani Maruge that school fees would be abolished now. But she remained composed and Kimani Maruge remained the school denied. After decades of futile waiting Kimani Maruge wanted the training program now finally avail and enrolled in full of anticipation for the first grade of primary school.

Kimani Maruge: "freedom means going to school and learning. You're never too old to learn "

Kimani Maruge but was sent away from school just because you did not want a 84 years old student in the class. But Kimani Maruge insisted on his right, he persisted and was eventually picked up by his single-mindedness of the school. Its main goal was to learn to read and write, so that he finally was able to read even in the Bible. Kimani Maruge used every minute and learned as much as he could. At his age it was no longer as easy, but he put such a great passion to the day that he was even elected as Head Boy. Kimani Maruge was a model student, except for the sports teaching, where he could not keep up simply because of his age.

The history of the oldest students of the world spread like wildfire and the media began to report on Kimani Maruge. In 2005 he was invited by the United Nations to speak at the General Assembly in New York (USA). After his first trip unscathed in an airplane, he gave a highly acclaimed lecture on the importance of free primary school instruction. Kimani Maruge was in his homeland for famous ambassadors for free education, however, broke out in his country soon political unrest and led to violence.

Kimani Maruge was driven out of his house and he had to flee to a refugee camp. However, he wanted to leave not take his hard-won right to education and marched each day, four kilometers to continue to attend school. However, when the situation became too dangerous, Kimani Maruge moved to a nursing home to Nairobi, capital of Kenya. Once there, he immediately returned to a nearby primary school, but his long-awaited school he no longer managed.

Kimani Maruge died on 14 August 2009 from the effects of a stomach cancer. Despite his cancer diagnosis, he visited more every day to school, as long as it still allowed his health. Although he failed his degree, the name Kimani Maruge became known far beyond the borders of Kenya addition, even a movie was made about him. His passion for education was so extraordinary that he was able to convey the importance of lifelong learning many people, in spite of old age. With this setting, he motivated not only the kids ready for school, but he also brought many adults the courage back, to broaden their horizons.

Kimani Maruge: "For me, education is the key to freedom"