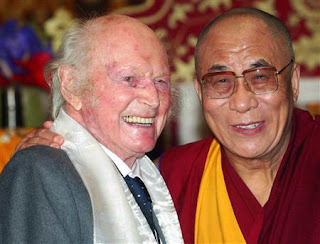 Heinrich Harrer was born on July 06 1912 in Carinthia (Austria) and grew up in modest circumstances. His father was a postal worker and his mother was a housewife, for it was a normal middle-class life and inevitable. But Heinrich Harrer was unlike many young people, because he felt the urge early as adventurers to discover the world. Already during his school days and his successful studies (geography and sports), he moved again and again in the great outdoors. He was very active in sports, he earned his pocket money with mountain guides and ski courses and also was academic downhill world champion in skiing. He was very talented, he took over in the meantime, the women's ski team as a coach, by the way he made even athletics and even became the Austrian Golf Champion. But a leisure activity, it had particularly impressed him, the fascination of mountaineering.

At the age of 26 years he ascended successfully together with three other men, the notorious and dangerous Eiger North Face in Switzerland. Never before this was a mountaineer succeeded because most climbers arrived at this "murder wall" killed. Through this daring ascent they were even welcomed by the then dictator Adolf Hitler who wanted to exploit the heroism of men for its propaganda purposes. But Heinrich Harrer was only interested in his adventurousness and 1939 went a short time later on a fact-finding expedition to Nanga Parbat (mountain in the Himalayas mountain system in Asia). But this was an abrupt end, because due to the widening of the Second World War, the expedition members were captured and shipped in a British internment camp in Northern India.

For Heinrich Harrer freedom has always been in his life the most important, for this reason he was very unhappy in this fenced by barbed wire stock. And so he immediately thought of an escape from this captivity and prepared conscientiously before it. He trained every day his body to his good physical condition to get, no matter how bad the weather was. In addition, he learned Tibetan and Japanese, in order to communicate with the locals can. Despite numerous unsuccessful escape attempts, which were always punished with long solitary confinement, Heinrich Harrer did not give up, and at the fifth attempt he actually managed. After several years of captivity he made on 29 April 1944 to flee to Tibet. This road was paved by inhuman and unimaginable hardships, so it hardly dared another prisoner, to follow this route.

Heinrich Harrer and his friend Peter Aufschnaiter set out together on the way to the forbidden city of Lhasa, the Tibetan capital. They gave themselves as pilgrims from traveling, but they always had to fear being recaptured and imprisoned. The trip was very difficult, they had numerous mountain passes of over 5,000 meters and overcome wander through many cold rivers. Violent snowstorms, two digit sub-zero temperatures, frostbite and lack of food made their adventurous journey to an incredible challenge. Again and again, they met on the road wandering nomads who mostly recordings friendly and provided them with food. After nearly two years of unimaginable agony they finally reached the city of Lhasa, over 2,000 kilometers on foot they had hitherto been behind him. But how would the people react to the two dirty and unkempt wanderer? Because this location at 3,600 meters above sea level capital of Tibet was at that time largely unexplored and completely secluded from the rest of the world.

However, contrary to all fears they were neither recognized nor retained, as they entered through the main gate of the city. The suffering from hunger and cold adventurers were soon picked up by a nobleman, they were able to wash now, got fresh clothes and could shave their already long beards. Her story of the escape from prison and the adventurous journey through largely unexplored areas spread rapidly, and the residents appreciated the perseverance and courage of travelers. Bald confidence grew in the Wanderer, and Heinrich Harrer and Peter Aufschnaiter could actually stay in this strange and mysterious city. Now working for the Tibetan government, built irrigation systems, canals and dams, because Lhasa was severely underdeveloped unlike civilized cities. Heinrich Harrer got a totally different culture and know was completely fascinated by the religion and the attitude of people here.

Heinrich Harrer: "Even after a short stay, it was not possible anymore, mindlessly kill a fly. And in the company of a Tibetan I never dared to refer to an insect, only because it was annoying me "

Since Heinrich Harrer was a very well-read man, he was soon commissioned to teach the then young 14th Dalai Lama (head of Tibetan Buddhism). He brought him closer to the Western culture and taught him English and geography. The young Dalai Lama, who was then 14 years old, was very interested in the stories of Heinrich Harrer and they spent much time together. It developed a close friendship between them, despite the different origins. Tibet was for Heinrich Harrer's second home, here he felt comfortable. Surrounded by the fascinating landscapes, the mighty mountains and rivers he felt nature, as he introduced himself, he could additionally explore uncharted territories here and foreign cultures to meet.

In the fall of 1950 the quiet life of Heinrich Harrer and his friends, however, was abruptly over, because Chinese troops occupied the land by force. Temples and monasteries were destroyed and many Tibetans were killed. When the troops were advancing ever closer to Lhasa, had Heinrich Harrer, just as hastily flee like many Tibetans and the Dalai Lama. In this hectic time, Heinrich Harrer had to say goodbye to his friends and returned in 1952 after more than 13 years abroad, returned to his home to Austria. Overwhelmed by his impressions and experiences in a faraway land, he began to write books and his adventures to tell in television broadcasts.

Heinrich Harrer undertook many other trips, for his adventure was not yet over. He explored the Amazon (South America), the first man boarded the "Carstensz Pyramid" (mountain in Indonesia) and traveled to the most remote areas of the world to report on it. In later years he also visited his great love Tibet, where he spent such a long time, and thought back to the happy times and carefree hours with his friend, the Dalai Lama.

Heinrich Harrer traveled the world as an explorer and discoverer. At a time when many areas were still undiscovered, he proceeded boldly and always went way that had never dared a man before. He made a major contribution, for the Western world to open Tibet and to make known internationally. His written book "Seven Years in Tibet", where he talked about his life in Tibet, became an international bestseller and was translated into more than 50 languages ​​worldwide. This story was made into a film in 1997, the director, the actor Brad Pitt and other cast members were therefore of China occupied by a lifelong entry ban to China, because China refuses to recognize the independence of Tibet today. Many uprisings in Tibet are today brutally suppressed by China.

Heinrich Harrer died on 07 January 2006 at the age of 93 years. Until the very end he had a close friendship with the 14th Dalai Lama, to whom he gave his time teaching. He lived his life always as he wanted it. Full of extraordinary adventures and stories that fascinate people today.

Heinrich Harrer: "The question of why one is doing something unusual arises not. The reasoning could easily be the pleasure of great adventure "