A Story From Mountain 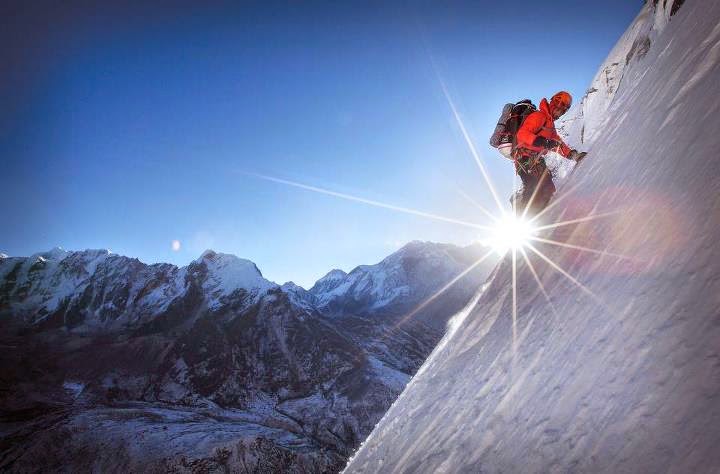 Once, there was a young mountain climber who was getting ready to travel to a mountain. On the back, there is a backpack carrier and diverse carabiner (hook) which looks hanging. Not forgetting rigging a circle on his shoulder. The climb is quite heavy this time, preparations were made even more complete. Now, in front of a mountain towering is so high.
Peak invisible, covered in white snow. There is a cloud around it, almost no one knows what is hidden in it. Start young climbers to step, treading the snowy streets that lie before him. Hooked stick that in use, seemed stuck every time he swung his step.
After several hours of walking, he began to face the steep of wall. It was impossible for him to move on. Preparing of ropes and hooks in his back. The cliff was too steep, he must climb the rigging it. After a few hooks plugged in, suddenly rumble coming from above. Gosh, there was a blizzard that come unexpectedly. Avalanche looks heavy overwrite the climber's body. Chunks of hardened snow, continue to fall with the wind that made her body tossed toward the wall. The storm continued for several minutes.
However, fortunately, ropes and hooks had saved him from the steep wall. All equipment has disappeared, there is only a knife in his waist. Now he seemed to hang upside down on the steep wall. His eyes blurred, because everything looks white. he did not know where he is.
The climbers are so worried, then he asked to God to be saved him from this disaster. His mouth kept muttering, hope there is help the Lord came to him.
Silence after the storm. In the midst of the panic, seemed sound of his heart that told him to do something. "Cut the rope .... cut the rope. Silent sound across his ear. The climber was unsure whether this command of God? Does this sound is help from God? But how is it possible, cut the rope that had been rescued himself, while the walls are so steep? My vision was obstructed by snow this, how would I know? Lots of questions in him. He long pondered this decision, and he did not take any decision ...
A few weeks later, another climber find a body hanging upside down in a steep wall. Body seemed frozen, and appears to have died of cold. Meanwhile, the body boundary with the land, just 1 meter course ....
*** My friends, perhaps we would say, how stupid that climber, who refused to obey his conscience. We might deplore the climbers who do not want to cut the rope clamps.
Climber it would be safe to let it fall to the ground which is only 1 meter. He certainly did not have to die of cold because the rope is precisely made blocked.
That is, sometimes we think, why the God did not seem to protect His servants? We may often feel, why are there so many burdens, problems, obstacles that we face in this life road climb. We often find there is a lot of snow storms continue to hit our bodies. Why is not provided, the straight path, without the need to climb, so we are free from all obstacles that?
But my best friend, trials given the Creator created us, is exercise, is a test, is like iron-wrought, are like knives honed. Indeed, in all the tests, and practice it, there are stored instructions, there are hidden signs, as long as WE BELIEVE.
Yes, as long as we believe. How big our trust to the Creator, so as to make us "cut the rope hook" when he hung upside down? How big trust us to the Creator, until we are willing to give up all that is in us to Him? Because believe there is in the heart, then continue to cultivate it in your heart. Because trust is stored in the liver, then fill your conscience with that power. My friend, believe me, there will be instructions of the Creator in every step we tread the path of this life. Look, dig, and find a sense of trust that in your heart. Therefore, when we have to believe, then it will come with a manual unexpectedly.