Jessica Joy Rees: "I'm dreaming of the day when any cancer-fighting child has the courage to never give up" 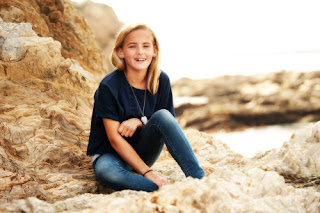 On March 3, 2011, life changed for a 12 year old kid, Jessica Joy Rees abruptly. In a nuclear spin tomography (images of the body's internal) a tumor was found in the brain of the little girl. Because this brain tumor was inoperable, Jessica had to undergo difficult chemotherapy and radiation. On the Internet (Facebook), she documented her fight against cancer and her hope of getting well again. During her sometimes painful hospital visits, she lost her hair and became numb in one ear, but little Jessica fought for her health. In the midst of this fight against malignant cancer, however, she had the idea to help other children who also had cancer. Jessica radiated tremendous hope for her healing, and she wanted to convey that hope to other children. Together with her parents, she founded the "NEGU Foundation", a foundation for cancer-affected children. NEGU - Stood for Never Ever Give Up! But in the middle of their fight, the doctors suddenly found a second brain tumor on September 9.

"30. September 2011 The radiation makes me so tired. I need to rest more on the weekend so I can rebuild my strength for next week. Still have pressure on my ears and my right eye is moving upwards. I hope this will soon pass. Thank you for praying for me. We will all beat these tumors. NEGU, Jessie"

Jessica was a brave girl and tried to continue fighting despite the shock. They published more Facebook entries, which they mostly with NEGU, Jessie! Never give up, Jessie? In the meantime, more and more people were following the girl's entries on the Internet, which boldly took up the fight against this bad disease. Even the famous actress Eva Longoria visited her in the hospital to donate her strength and her NEGU Foundation. Where, for example, colorful marmalade jars filled with sweets were given away to other cancer-affected children.

"25. December 2011 - Merry christmas to you all! Please pray for me. I've found quite a pain in my knees. This comes from the steroids. It really hurts very much. I hope this will be over soon. Was awake most of the night. Mommy and Daddy have rubbed my knees all night. I hope you all have a great Christmas. NEGU, Jessie "

Jessica looked positively into the future and fought bravely, she was already looking forward to a great new year 2012. Her mission with her "NEGU Foundation" Wanted to take her away, because her goal was to encourage children with cancer to never give up. A happy heart would be the best medicine, so was the message from Jessica. The girl still radiated confidence and hope, but her own condition became more and more critical.

"04. January 2012 - My headaches do not get any better. Was awake till 4 in the morning and knocked my temples. It hurts to move. Please pray that this goes away. It is frustrating and really no fun. Your Jessie"

This should be Jessica's last entry. When her condition did not improve, she was taken to the hospital with an emergency team. Jessica was only able to experience a few more days of the new year because she lost her fight against the cancer and died on 05 January 2012. Her parents wrote a last entry about their deceased daughter:

"05. January 2012 - Dear friend, We prayed for our sweet Jessie and prayed that she would be cured here on earth, but it was God's plan to heal them in heaven. Jessie got wings today and is now with Jesus. No pain, a perfect vision. Popular happiness. Please accompany us to their happy spirit and their "never-giving-up attitude" Into the world."

The participation of the people in the death of the young girl was overwhelming, their side on Facebook already had over 100,000 fans and grew constantly. Jessica had lost her fight against cancer, but her death was not in vain. With its founded, NEGU Foundation! Her brave fight against her illness continues to this day. For with her attitude of thinking, in her most difficult time, not only to herself, but also to other sick children, she became the model for many people. Many children have already been given a better life.

Jessica Joy Rees: "I'm dreaming of the day when any cancer-fighting child has the courage to never give up"