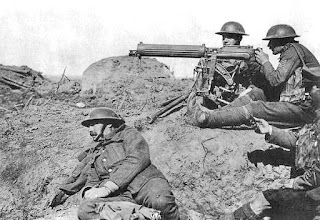 End of 1914 the so-called war grave during World War had reached its peak. The Germans, the Belgians, the French and British were standing at the front in the West on the one hand, on the other side opposite. Due to heavy fighting both war opponents have faced significant losses, for this reason trenches were quickly dug to gather strength and to have an effective protection against the enemy. The combat zones were soon frozen in a trench warfare and the soldiers on both sides buried themselves more and more in its endless trenches. What the soldiers had to endure amidst the constant ball and shelling in these trenches, was a relentless torment.

The men were suffering from lack of space and the ever ubiquitous vermin such as rats or lice. For this, the dirt and the mud came in the foxholes, the constant humidity caused a great suffering. In the summer of unbearable heat prevailed in the trenches, in winter, freezing cold. The psychological strain for each soldiers from both sides was enormous, because only a small inattention, and the enemy snipers were there and doing their job. Killed men could often not be taken away and rotten in the immediate vicinity of the trenches, which had a horrible stench result. So vegetated the soldiers in these trenches there, and the mood of both sides was soon reached the lowest point since the holiday season began. The men who were stuck in the cold trenches, thinking of their wives and children and the fact that they could not celebrate with them in a warm home a quiet Christmas.

On December 24, 1914, many soldiers were given Christmas presents from their homeland and the longing for some rest grew. Between the warring parties agreed that they could recover the dead and should not be shot. After the dead were taken away, the first enemy soldiers began to talk. They began to wish each other a Merry Christmas and no soldier had to grab the moment the need for re weapon. The German soldiers put small Christmas trees, which they had received from their homes, in the trenches and lit candles. On both sides suddenly soldiers began singing carols and more soldiers left their positions. What should be playing in no man's land (lying between the trenches terrain) soon, was chilling.

The soldiers who had still fought to the death a few hours earlier, now cigarettes and food exchanged among themselves. They made gifts, sang Christmas carols together and showed photos of their families. There was mutual haircutting and it was initiated together with beer. Surrounded by minefields and barbed wire football matches were held and there were regular fraternization. The focus was now no longer a soldier, but the human being. Despite the terrible war the soldiers were even people with the same needs. Most supervisors of both sides accept this unplanned ceasefire, but only for a short time. Under threat of severe disciplinary action, the soldiers had to be back soon entrenched in their uneasy trenches and attack back to its weapon. This was followed by a few shots in the air, then was war again.

This Christmas Tale of Christmas peace, in the middle of World War I, should remain unique in world history. Next year this Christmas peace was no longer tolerated under threat of court-martial of the commanders. To date, this ceasefire has a remarkable significance, because if people really want it, any hostility has come to an end.

The First World War, which lasted until 1918, called for some 17 million lives. But remember this was a temporary Christmas Peace, in which the bitterest enemies were celebrating together and for a short time even became friends.