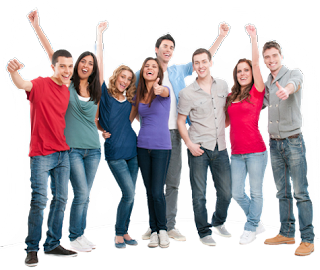 Many students after graduation to venture into self-employment, which is often but some risks. The two students Christian Kaar and René Giretzlehner constructed during a study project once a GPS monitoring program for a sailing regatta in order to analyze the distance traveled the boat accurately. Together with their friends Alfred Luger and Florian Gschwandtner from a new business idea was developed, because the satellite system could also be used perfectly for the sports world to record data with it. The group then began to forge initial plans, the students were indeed perfectly trained in computer language and experts in programming, but the realization of their idea was far from easy.

They wanted to develop a sports and fitness program that mainly for smart phones (mobile phones) and portable computer (tablet computer) was intended. Through this application software ("app") could record exactly sporting activities and also analyze. The students did not realize the enormous potential of their project, in addition they wanted to design it for grassroots sport to be commercially successful with it. To raise funds for the project, supporters were searched, but their idea they bounced off to potential donors, because you kept this App only for a gimmick, you will gain make no profit. Florian Gschwandtner and his team were met with an insurmountable hurdle and no money could not the plan into reality.

Florian Gschwandtner: "In the beginning it was almost impossible to find investors"

The young people now had to take on other jobs to earn money. The occupied capital but was immediately put back in their project and to put everything on one card, as in 2009 the company "Runtastic" was founded. Many people saw this company was founded as too risky and thought of a letdown, but the friends worked hard and consistently to develop their sporting App. They kept together as a group and motivated repeatedly each other when things were not going according to plan from time to time. And soon first successes appeared, all of a sudden more and more people began to use widget and this extraordinary "Runtastic App". Through the social networks on the Internet rose abruptly the popularity of runtastic and now also investors became aware of this young and dynamic company.

People could now record all sports activities through the GPS system through this new app. This affected many possible sports like running, hiking, biking, skiing or snowboarding. There were a lot of useful information is requested, such as the speed, the duration of the workout, the distance or the altitude. Even the biggest anti athletes got through Runtastic now more motivation to move more and to make sport. But not only on outdoor activities confined themselves, Runtastic was constantly expanded by new functions. So also a noteworthy pushup program was developed, which enjoyed great popularity quickly. Fun and motivation were at the forefront to assist the people in their fitness goals, this philosophy one was dead right.

The sports and fitness app runtastic put back an incredible success story. With more than 20 million registered users and more than 50 million downloads Runtastic rose in its sector as the undisputed market leader. Runtastic but evolved sensational not only in German speaking countries, now you also worked in the US and in Asia.

Runtastic revolutionized the mobile sports app the pastime of many people. In the beginning but there were only four young students who, despite a lack of support and many critics never let themselves be beaten and always believed in their vision. Through this determination one of the most impressive start-ups originated in the area of ​​mobile apps.

Florian Gschwandtner: "I am firmly convinced that we can achieve any of his goals, if you only work hard enough. You have to be motivated and show use "