Didi Mateschitz: "Red Bull is not just a drink. It is a philosophy " 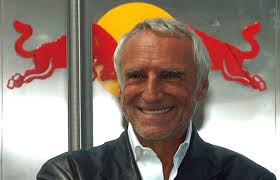 Dietrich "Didi" Mateschitz was born on May 20, 1944 in Sankt Marein im Mürztal in Styria (Austria). He graduated as a mediocre student from the school and then began to study at the University of Economics in Vienna. Even as a student Didi Mateschitz was not very ambitious, although he successfully completed his studies, but required for a longer time than prescribed. He was not really interested in the theory, but wanted to do his own practical experience. Didi Mateschitz then worked as a sales representative and was active in marketing for various companies. He was very successful, but in spite of his good salary he was not happy.

Didi Mateschitz was under constant stress and deadline was many weeks a year traveling around the world. Most of the time he spent on the plane and in airports, so he had not imagined his life. Again and again he had to deal with the same people in suits and ties, it was always the same gray everyday. Didi Mateschitz wanted to make more of his life, he wanted to be independent and completely independent of other people. On one his numerous business trips to Asia, an article in a magazine caught his attention where the greatest Japanese taxpayers were listed. To his surprise, there were no global corporations like Toyota or Sony on the top of that list, but a completely unknown to him industrial company, which sold energy drinks.

Didi Mateschitz was fascinated by the fact that you could be with such a simple product largest taxpayer in Japan, because behind it had stuck a huge profit margin. From now on, he began to research on energy drinks. The idea of ​​these drinks with the main ingredient taurine went back to World War II, where pilots from Japan received these drinks to improve their visual performance. While this took not much, but such energy drinks were only a few years after the war in the Far East all the rage because the ingredient taurine, a revitalizing effect was said. In the Asian market that energy drinks were mainly drunk from truck drivers, to survive longer journeys without sleep. So popular that energy drinks in Asia were so unknown they were in Europe. Didi Mateschitz recognized this gap in the market and also saw for the first time the opportunity to start his first store.

Upon prompt market observation and countless tastings of these energy drinks, the time for Didi Mateschitz had come to implement his idea. 1984 at the age of 40 years, he teamed up with Thai partners, the company "Red Bull". Didi Mateschitz quit his well-paid job in order now to concentrate fully on his business idea. In numerous laboratory tests, the recipe had to be adapted to Western tastes and it had to be convinced by the strict Food Safety Authority. However, the most important point for Didi Mateschitz was the marketing strategy. How obsessed he perfected a a matching slogan and design on the can. In addition, he had to contend with many resistors because of his idea few people were convinced.

Didi Mateschitz: "There is no existing market for Red Bull But Red Bull will create it."

Most friends and all marketing experts advised him of his idea. The sweet Energy Drink looked unappetizing and caused a vile sticky taste in your mouth. The aspect that the beverage should stimulate the mind and body, was entirely irrelevant to the experts. They gave Didi Mateschitz not the spark of a chance to have success with its new energy drink in an already highly competitive beverage market. But Didi Mateschitz did not let it get from these statements and believed still to Red Bull and its energy drink. After three years of countless tests and hard work of the time was right and the first energy drink was introduced in 1987 in the Austrian market. Under the slogan "Red Bull gives wings" trying to convince people of his new drink Didi Mateschitz.

From the very beginning put Didi Mateschitz almost his entire savings in order to spend it on advertising for its product. He knew he had to succeed because too much time and energy he had already invested in this project. The competition took Didi Mateschitz with his idiosyncratic drink seriously, they thought it only for a brief fad that could not keep longer in the market, also it cost many times more than conventional beverages. But they should not underestimate the creativity and ingenuity of Didi Mateschitz, who wanted to establish a self-willed concept the brand Red Bull.

Didi Mateschitz: "Red Bull is not just a drink. It is a philosophy "

To stand against the overpowering rivals to Didi Mateschitz new marketing strategies devised over and over again. It supported many successful athletes and also extreme and trend sports. Skydivers, mountain bikers and snowboarders were heroes in their scenes and daredevil who crossed ausloteten the limits of possibility, this was a perfect fit for Image of Red Bull. In addition, Red Bull engaged in motorsport, football or hockey and you kept thinking up new possibilities of, to improve the brand Red Bull. Through this consistent marketing Red Bull soon acquired a very high level of awareness and more and more people drinking this energy drink. Didi Mateschitz built his company in the following years with hard work continues on, and this very successfully.

Red Bull developed world to one of the famous brand, and rose to become the undisputed market leader in energy drinks. Billions of cans of Red Bull were sold each year and sales rose continuously. Within an hour now so many cans were filled as in the entire first year of launch.

Didi Mateschitz had managed to single-handedly, he built within a few years an internationally operating Group on. He spotted a gap in the market with the energy drinks and developed to one of the best marketing programs in the world. He announced with much risk his job in order to realize his vision of Red Bull and succeeded against all critical voices, introducing an entirely new beverage brand. Didi Mateschitz thus rose to a billionaire, he accomplished this by his determination, his perseverance and his stubborn desire for success.